I will be completly honest.  I almost left Esto Vir after my freshman year, thinking it wasn’t for me because I had my issues with the leadership, and thought everyone who was in charge was like that.  What kept me?  People like Ryan Gebhart (even though I didn’t know him that well at the time) or Chris Anderson.  People like Jimmy Kimmel and and Kieran Kelly.  People who had truly become something that we all strive for, and something that Esto Vir is based on:  Brotherhood.  It is these because of these friends, nay, these brothers that I stayed in Esto Vir.

My Brothers in Esto Vir carrying me through the ropes course on a brotherhood weekend.

The Knights of Columbus, on the other hand, doesn’t strive for brotherhood, but fraternity.  It is with the knights as well that I found brothers.  People like Drew, and Alex.  People like Tim and Ryan.  Father Frank has always been there when needed (Thanks again for that ride home from Providence Father!)  People like Tim and Brett, like Victor, Ajani, and Andrew.  It was with these great group of guys that I was able to liturgy-geek it out all the time.

These Groups have also been found in other places.  It was through RENEW that I became great friends with a great group of people.  Steve, Bridget, Nora, Marley, Kathleen, and (the ever occasional) Joe and Conor.  It was with you all that I grew deeper in my faith, that I really started to expand my eyes and insight into the Gospel (when we actually read it) outside of my own small understanding.

Last, but certanitly not least, out of all  the groups I have been a part of here at Catholic, World Youth Day has certainly been one of the best.  It was an ecclectic group of people, and everyone there clearly knew a few people, but not everyone, and we all turned into one big family through all of the trials we were put through, from our first flight being cancelled, to loosing our bags at JFK, and having to wear the same clothes, to the long days and hot nights of Madrid, we all got to know each other very well.   I became great friends with some great people that trip, and being thrust back into CUA without the same people that I was living with for the past 2 weeks was rather weird. 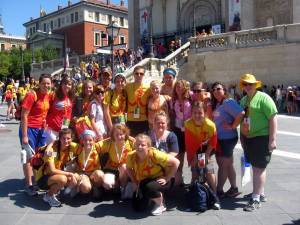 Some of the group outside of the Prado, in Madrid

It is with these great groups that I developed my family, grew into great relationships, and will certainly miss every day I am not here.

My good friend, and classmate, Kieran, wrote a post on why he loves CUA.  I thought it to be a very fitting post as we both are coming to the end of our undergraduate careers here at CUA, and then being propelled in to bigger and better things and places, all because of what we learned here at CUA.

So, why do I love CUA?  There are many different reasons.  It not only has been place of residence for the past four years, it truly has been my home.  I have grown here more then I ever dreamed possible.  I have learned who I really am.  I have never once feared returning g to CUA.  In fact, I looked forward to returning to CUA after every break.

The Catholic University has become my home for many different reasons.  First off, CUA has amazing people, amazing groups, amazing offices, and an amazing Church right next door! (In  fact, I’m writing this by hand in  that amazing church!  Why am I writing this down?  I know not, but I digress…)

Lets start with some people.  I got to know my friends, people who I really do think I will be friends with for the rest of my life here at CUA.  People like Drew, and Kieran.  People like Chris, Chris, Ryan and Jimmy.  People like Tim, Ryan, and Zachary.  People like Frs. Frank, Vito, and Weston.  People like the Sisters.  These are all people who have influenced my life in a huge way.  I would  not be the person I am today without them.    I met them all in different places, through different things, at different times.  Whether at Freshman retreat under Bertha, or Esto Vir or Knights of Columbus, or even the Basilica, I am extremely grateful for the chances that I got here.

From Bertha, to Morality Pie, to Goffart, I will miss my home away from home.  I will miss all these fun times we have had together, but I will never forget.

All views here are my own personal opinions, and are in no way official teachings of the Holy Catholic Church, the Catholic University of America, or any other institution that I am affiliated with in any other way.